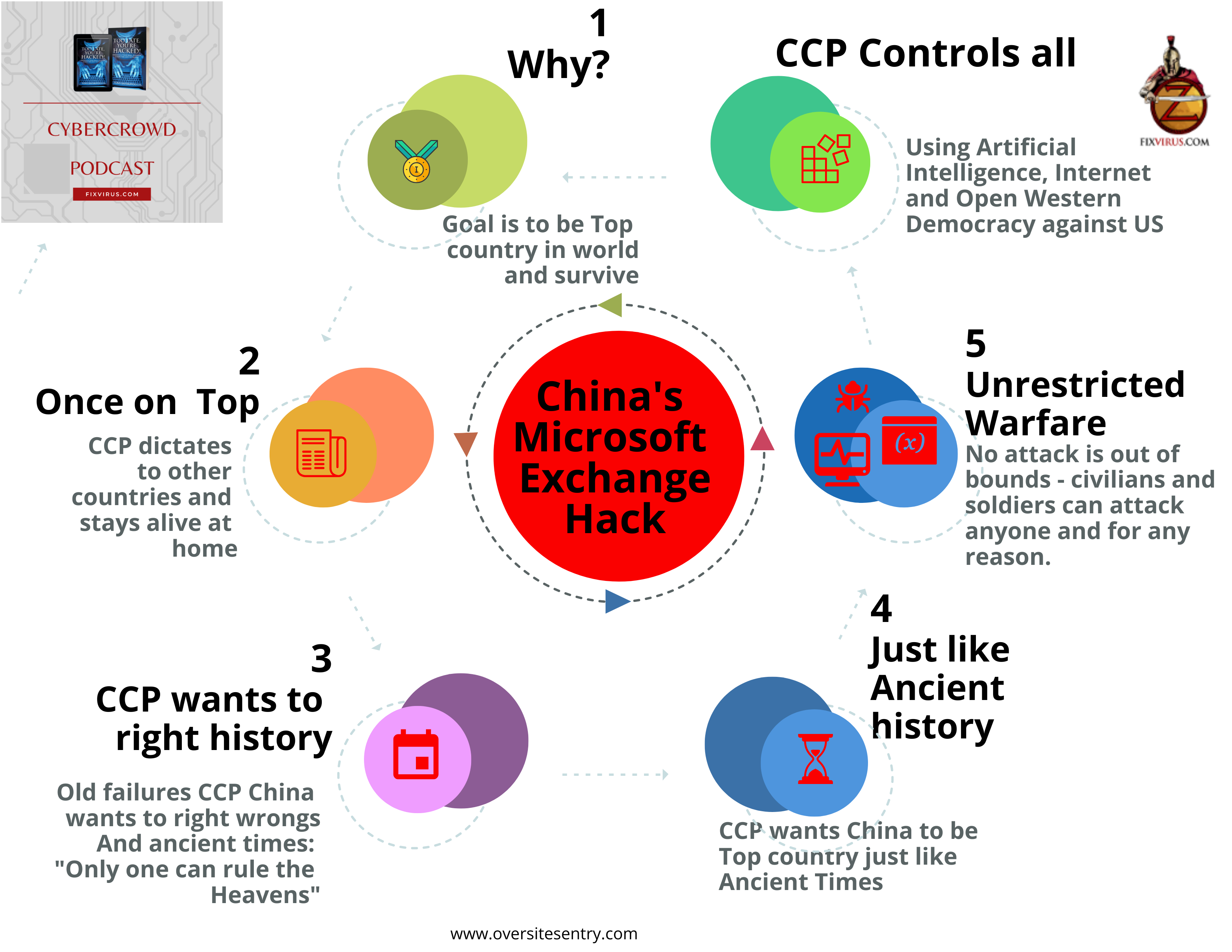 Remember the  Exchange server hack from a year ago (post from 3/16/21)? “Exchange Server Attacks Just Beginning?”

“Attacks exploiting the flaws were first spotted in January. They initially were limited and targeted, seemingly for espionage: the adversaries primarily targeted specific email accounts. Microsoft attributed the activity to a group it calls Hafnium, believed to operate out of China.

Then during the last weekend of February, researchers noticed a significant uptick in remote code execution. Attackers were writing Web shells to disk and launching operations to dump credentials, add user accounts, steal copies of Active Directory databases, and move laterally to other systems. The surge in activity – curious for an advanced Chinese attack group – pushed up the timeline of patches.”

Today over a year later it is instructive to look into this topic again.

Here is another article from npr.org:

Apparently the Chinese had been collecting  small and medium businesses system administrator email addresses (why would that be – I wonder?)

This is the relevant paragraph:

Stealing information from small- and medium-size businesses out in the American heartland doesn’t immediately suggest espionage. Instead, officials believe the Chinese gather this information to help them construct the informational mosaic they need to build world-class AI. It explains their tendency, Todt said, “to gather and aggregate data and as much as possible and not discriminating where that data comes from.”

The reason we should care about that is because of the role AI plays in our everyday lives. It is becoming the mechanism by which insurance rates are calculated, credit is given, mortgages are approved and health care data is calculated. And Todt said Americans should take a moment to reflect on what it would mean to have a technology that will touch our lives in a myriad of ways built by someone else and, more specifically, China.

“As it builds out its AI, China can social engineer to its priorities, to its mission,” she said. “And that mission may be different from ours.”

The Chinese CCP controls  all private companies in  China and it has a variety of reasons for wanting to accumulate data. By the time we find out what the CCP is actually up to it will be too late.

(China CCP wants to control everything because then they think they will stay in power forever), They want to use Unrestricted Warfare using the principles of Legalism – where everything is based out of and skews to the central government. One can never sue the central government and win (not wise to sue them). And most of all CCP wants to right the wrongs done to China by the west during he boxers rebellion and the opium wars. The idea is to make China like it used to be in 300BC where there were no other countries fighting them with any strength.  There is an ancient lore saying that there can only be one sun in the heavens and China is it.

The siphoning of data was not the only thing that happened:

In a timeline article at csoonline.com

March 22: Researchers from F-Secure report thousands of cyberattacks continue daily due to unpatched Exchange vulnerabilities. They state that only half of Exchange Servers visible on the internet have applied required patches.

Of course at some point the criminal hackers (some in China some elsewhere) will want to use the machines for their crypto  mining methods.

As I have discussed before Unrestricted Warfare written by 2 Chinese Air Force Colonels has now been translated and discussed in “War Without Rules” by Brigadier Robert Spalding.

It does a great job starting to give some background in why China is doing what they are as in cyberattacks with civilians and soldiers. Attacking and accumulating data for their AI and for future reasons.

The final reason is to overtake USA as it is the hegemon of the world. Or so the Chinese story goes anyway.

You should look at my book to explain why China is accumulating data on all of us for their needs in the future.

Why else would they be collecting small business administrator emails.

I have said before TikTok is an arm of the CCP and  everything you do on it will be logged and kept for future use. Sure as a young person maybe making some fun videos

Buy the book with this link

We have to learn to defend our computers and to deny China.